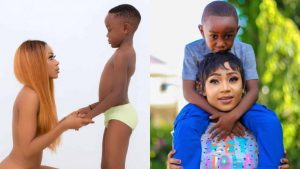 Ghanaian actress, Rosemond Brown popularly known as Akuapem Poloo has once again set social media ablaze with hot photo as she celebrates her son’s birthday standing naked in front of him.

Fans are in shock after she shared a naked picture of herself and son on social media in celebration of his birthday. The photo is already garnering massive reactions.
Akuapem Poloo for some time now has been silent on social media and this new picture from her is how she chooses to break her silence.

I am not behind your disgusting nude...