List Of TV Stations Shut Down By NCA (Check Out)

Breaking news: Chelsea Preparing Their Exist From The European Supper League Roman Abramovich Decided Not to Go Ahead

” Nana Ama Mcbrown should be Arrested “; [See why] 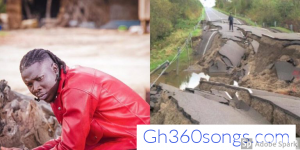 Stonebwoy has joined the likes of Wendy Shay, Sarkodie and Shatta Wale to react to the earth tremor that happened in Accra last night.

Stonewboy also felt the earth tremor that happened in some parts of Accra last night. He took to Twitter to react to it.

Read more:Sarkodie reacts to earth tremor that happened in Accra

The president of the BHIM Nation subtly said he was scared when the tremor occurred.

He tweeted: “That first Hit Herrrrrrh!”

Meanwhile, Wendy Shay has given her life to Christ.

Parts of the Greater Accra and Central Region have experienced earth tremors.

Related:Shatta Wale reacts to earth tremor that happened in Accra.

Stonebwoy Endorses Kahpun, Claims He Is The...