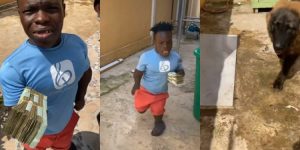 Iddrisu Firdaus, also known as Shatta Bandle, is a Ghanaian actor. He is from Karaga in the northern part of Ghana. In 2019, he became very known in Nigeria, South Africa, and Ghana.

Related:CCTV films two bread sellers of a company ‘Chewing themselves’ while at work

man in Africa, started circulating. He had no formal education. He speaks Dagbani, his mother’s tongue language.

His fame got him talked about by the famous people in Nigeria, Ghana, and across Africa. He was featured in a music video by Rudeboy in 2019 titled “Audio Money”

Part taking in the dont leave me challenge Shatta Bandle gets chased by a dog as he quickly runs into the house without finishing his challenge
Tags: Shatta bundle